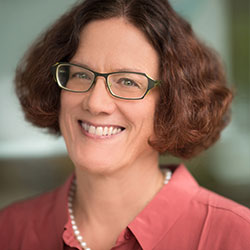 Maureen S. Dorney has over 20 years of experience representing public and venture-backed technology and media companies. Prior to forming Paradigm Counsel, Maureen chaired the Technology Transactions Group as a partner at Gray Cary and subsequently co-chaired the Technology and Sourcing Group at its successor firm, DLA Piper. Maureen is named in The International Who’s Who of Internet and e-Commerce Lawyers 2008 and, by the Recorder as one of the San Francisco Bay Area’s Best Lawyers (2012-2013). Maureen regularly lectures on topics such as international property licensing transactions, patent licensing and intellectual property strategy and open source software.

Maureen works actively with various non-profit organizations and fair trade companies working to improve the economic and environmental conditions in Africa. She is a founder of With These Hands, a fair trade company working with woman’s groups in Africa to develop and export fine handicrafts that reflect and preserve indigenous cultural traditions. Maureen is also working towards certification as a Pilates instructor.