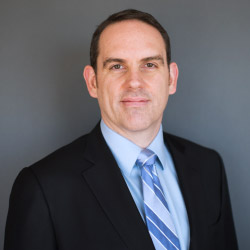 John Oliverius is a transactional attorney and former business affairs executive with over eighteen years of legal experience in licensing, commercial, and corporate transactions, chiefly counseling entertainment and sports media industry rightsholders. At Paradigm, John’s focus is commercial and IP transactions and corporate representation of companies at the intersection of technology, innovation, and media and entertainment, including esports and sports-centric early-stage ventures.

John began practicing law as a corporate associate in the Technology, Media, and Telecommunications practice of Greenberg Traurig, LLP in New York City, and later served as a business affairs executive in a variety of roles at NBC Universal, Viacom Media Networks, A+E Networks, and Pac-12 Networks. Over his legal career, John has led a broad range of domestic and international content licensing, distribution and media rights deals involving a myriad of technology platforms, and other matters including M&A, MFN analysis, retransmission consent, FCC compliance, and broadcast production.

John brings to his practice fluency in esports as well as traditional sports media. He is the publisher of the China Esports Biz newsletter following industry developments in the world’s largest esports market, and is a regular speaker on topics involving the business of esports in Asia. In recent years he has provided business consulting for sports and esports organizations.

John earned his B.A. from the University of California at Santa Cruz, and his J.D. from Fordham Law School in New York, where he served as the Editor-in-Chief of the Journal of Corporate and Financial Law. He is admitted to the bar in New York and California, and is fluent in Mandarin.

John also manages social media for the East Bay Hurricanes, an all-girls division of the East Bay Cyclones travel baseball organization (of which his daughter is not coincidentally a founding member), and supports organizations that are breaking the barriers to youth baseball for girls. In what is left of his spare time, John enjoys photography, cooking Szechuan cuisine, snowboarding, climbing rank in his favorite MOBA, and the constant journey of being an SF Bay Area sports fan.